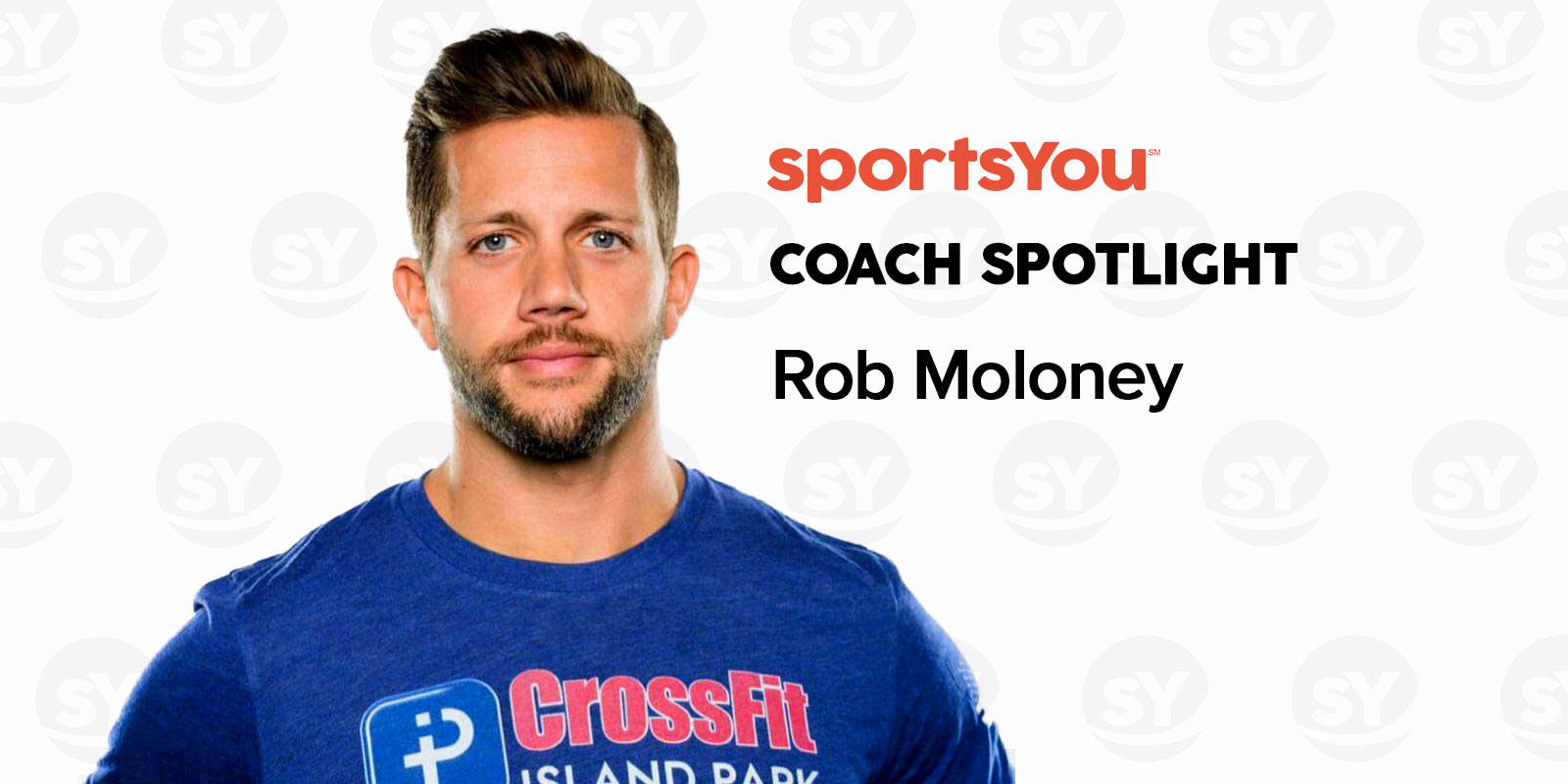 CrossFit coach and sportsYou user, Rob Moloney, takes his job very seriously and it shows. After starting his career as a CrossFit coach in 2013, he worked his way up to owning the Island Park, New York CrossFit gym in 2017. He got there through hard work and integrity – those are qualities he aims to instill in his members. sportsYou had the chance to chat with him about how he got started with CrossFit and his struggles and achievements along the way.

sportsYou: Can you tell me a bit about CrossFit and your gym?

Rob Moloney: Every CrossFit is under the same name but everyone has their own unique identity. Ours has come from what I believe in as a person, as an athlete and as a professional. Our slogan is “in pursuit of excellence” and that is what we are always striving to do. Most of that is done through integrity. We always are looking to do things the right way. That means keeping the integrity of the movements that we do, so we’re not just trying to get by cheating our way through things. Everything we do is with the intent of longevity. We want to be able to be as fit as possible for as long as possible. We’re not training to be the professional athletes of the world. That is not a job that is attainable for most nor can it last – as you see in professional sports careers. Very few people last 20 years or so. We’re looking to get the majority of the community to be fit both physically and mentally as well as to create better habits. Then the goal is to keep those habits. Our classes are designed with a lot of preparation and intent so that it puts everybody in the safest position as well as sets everybody up for as much success as possible.

sportsYou: What inspired you to coach CrossFit?

RM: I began coaching CrossFit in 2013, but I began CrossFit about six months before that. Prior to that, I was doing my own thing in a regular gym and making up my own workouts. I had a couple clients I would do some personal training with. A CrossFit opened up in my neighborhood where I was living in Brooklyn and I decided to try it. I said I would try for a month and then after that, if I didn’t like it I’d go back to doing what I was doing. It turned out I was not good at everything and the competitor in me wanted to keep going. While I was starting, I had an interest in coaching because I enjoyed being around fitness. I wasn’t enjoying my desk job because I didn’t want to sit down all day and I wasn’t passionate about it. I began part time coaching until a full-time position opened up. That’s when I made my decision I was going to quit my desk job and go with the unorthodox work schedule – wake up at 4:30 or 5 in the morning and then maybe not get home until 9:30 or 10 at night.

sportsYou: Can you talk about what why you started using the sportsYou app and what you use it for?

RM: Harrison Hefele, an employee at sportsYou, is a member and friend at the gym and he introduced my business partner and I to the app and gave us a rundown of how it works. As he was going through, sportsYou looked easy to use and it pulled the necessary things that I would need away from Facebook. I figured I would try it with a small group to see if it worked and then go from there. We have a weightlifting program that had about a dozen people in it. I had everybody log in and join a group. We still use it 2 years later for the same reasons. It’s great because everyone can post videos of them lifting and the coach can comment on it to give feedback. I also use the app for my whole coaching staff in the same respects as that weightlifting group. I post demo videos for them, so they know what new movements are coming up. I haven’t opened it up to the whole gym because it’s very difficult to move about 200 people in a different direction. But my plan is to try to do that because the only thing I use Facebook for is a group for the members.

sportsYou: What would you say are some of the biggest challenges that you face as a coach?

RM: One of the biggest challenges is staffing the gym with employees who have the same mindset that I have. That means getting a staff on the same page and on board with the focus and direction that myself and my business partner have for the gym in the long run. There are a lot of people just looking to get a coaching job but they’re not looking to necessarily learn more, coach more and put in the necessary hours. They’re just looking for a way to get paid.

sportsYou: What would you say is your greatest achievement as a coach so far?

RM: Owning my own gym, hands down. This took four years since being a full-time coach in the fitness industry. It didn’t hit me until almost a year into being an owner that I had actually accomplished this goal. One piece of advice I got from a good friend and mentor when I started coaching was to treat the place like you own it and one day you will. My plan was that if I wasn’t able to make a living off this in five years then I would re-evaluate if I would continue making it my full-time effort. With a great support system, I am happy to say that things are continuing to go in the right direction.